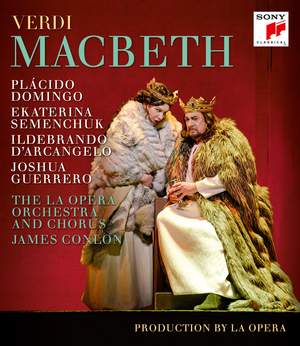 For a singer in his mid-seventies his voice is still is astoundingly good shape – it doesn’t sound old, and still has flexibility and power. But it is still the voice of a tenor…The Witches are... — BBC Music Magazine, Christmas 2017, 2 out of 5 stars More…

'LA Opera's latest production of Verdi s Macbeth (2016) features Plácido Domingo in the title role and Russian mezzo-soprano Ekaterina Semenchuk as Lady Macbeth. The opera is staged by Darko Tresnjak, who won a Tony Award for his direction of the Broadway musical A Gentleman's Guide to Love & Murder.

''When I was a young tenor, I loved playing romantic or heroic leading roles. When I began to add baritone parts to my repertoire six years ago, I was particularly interested in playing fathers, as I could draw from my own experience as a family man. Macbeth is a completely different kind of role for me. He is a murderer, but I think that he is also something of a victim, drawn into his crimes by the witches and by Lady Macbeth.'' Plácido Domingo''

For a singer in his mid-seventies his voice is still is astoundingly good shape – it doesn’t sound old, and still has flexibility and power. But it is still the voice of a tenor…The Witches are a jolly crew, and the Banquo of Ildebrando d’Arcangelo is superb, the star of the show. Conlon’s conducting is vigorous and idiomatic, as one would expect.

There is one outstanding performance: Ekaterina Semenchuk's Lady Macbeth, a mezzo with just the right kind of gritty yet gleaming tone - and a great top - to encompass Verdi's non-bel canto demands. She also acts with careful minimalism.