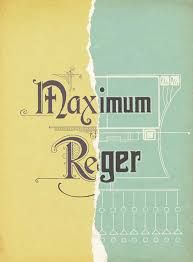 A relatively straightforward yet informative examination of Reger's life and works that is thankfully bereft of gimmicky visual effects. Through a sequence of extended interviews and musical... — BBC Music Magazine, August 2017, 5 out of 5 stars More…

Reger: Variations and Fugue on an original theme in F sharp minor, Op. 73

Reger: Variations and Fugue on a Theme by Bach, Op. 81

Reger: Sonata in B flat for unaccompanied violin, Op. 91 No. 3

This beautifully presented box-set consists of an in-depth documentary spanning three discs: a 210-minute film entitled Max Reger: The Last Giant, which covers the whole of Reger’s life and art. The story ranges from his extensive organ works and his use of complex counterpoint; his unconventional life and his problems with anxiety and alcohol; all the way to the triumphantly boundary-pushing works in which he expressed his own, singular relationship with the tensions between tonality and chromaticism that defined the period.

This unprecedented journey through the work of one of the early 20th century’s great artists also includes twelve hours of performances of Reger’s best music by an exceptional line-up of musicians. These specially filmed performances cover all or part of more than 50 of the composer’s 146 opus numbers. They have all been all specially commissioned and performed for the Maximum Reger project, and are available only with this box-set.

These recordings include performances by two German symphony orchestras, as well as some of Reger’s most significant instrumental and chamber works, plus a major survey of his substantial and varied organ music, recorded on five magnificent organs in Bremen, Chemnitz, Ludwigsburg, Ulm and Weiden.

As a Fugue State Films production, Maximum Reger boasts handsome production values with first-rate video and audio recording, and stars a host of world-class musicians and Reger scholars, who together paint a rich and vivid portrait of a true giant of classical music. It was filmed on location in many parts of Germany, and was created with full access to the Max Reger Institute’s massive archive of manuscripts, artworks and photographs.

This set of films compellingly places the composer in the context of the social and artistic maelstrom of the early 20th century, showing that in a musical world bequeathed by Bach, Brahms and Wagner – and about to be dominated by Schoenberg, Webern and Berg – Reger’s voice is one we should cherish. Maximum Reger demonstrates that Reger’s more experimental and chromatic music often rivalled – and sometimes even surpassed – the efforts of acknowledged giants of the period such as Schoenberg. This collection shows that Reger pushed with equal wildness against the limits of tonality, but did so while retaining an elegiac lyricism that, unlike his contemporaries, he never abandoned. This is what makes Reger both unique and relevant today. His singular voice is one whose lyricism coexists with its avant-garde experimentalism; whose sometimes immensely complex compositions and technical advances coexist with an appealing attitude towards the virtue of a beautiful melody on its own terms.

Reger has sometimes been overlooked by musical histories but, as this collection amply proves, his work boasts a unique richness of expression that deserves a central place in our musical appreciation. Reger's humour and vividness, his richness and variety of expression, and his own unique response to the questions surrounding tonality at that time, all mark him out as thoroughly deserving of the description given to him by Hindemith – ‘the last musical giant’.

• An acknowledgement that Reger's greatest work was in the field of chamber music, with sensational performances of his quartet Op.54ii and sextet Op.118.

• The first ever recording of a new orchestration of Reger's signature work, the Bach Variations, Op.81.

• An exploration of his vast treasure trove of works for violin, including performances by Sayaka Shoji of Op.87 and 117.

• A rendition of his orchestral song An Die Hoffnung, Op.124, a work as haunting and beautiful as anything by Mahler or Strauss.

• Exquisite performances of unknown masterpieces for piano, violin, viola and cello, plus the very best of his lieder.

A relatively straightforward yet informative examination of Reger's life and works that is thankfully bereft of gimmicky visual effects. Through a sequence of extended interviews and musical illustrations, the man and his legacy are probed in quietly persuasive terms...all in all, this is a hugely rewarding achievement that should persuade us all to revisit our preconceptions of Max Reger's place in music history.

Reger enthusiasts will relish this, but those not so familiar with him should equally explore such compelling advocacy of the composer’s music, life and legacy, told through fascinating documentaries and glorious music-making..An answer to a prayer, an obvious labour of love, and I think it fair to say that no labour is more deserving of love than Reger's life and work.

I had to pinch myself a few times to ensure that I was not dreaming. … I can confidently say that if you have any interest in the music of the first 16 years of last century, you should buy this set. Mortgage your house, sell your relatives into slavery, but get it!

Fraser wants to elevate Reger into “the pantheon of the great composers”. Maximum Reger makes a very persuasive case.

Opening of documentary about Max Reger

Op. 103a Minuet from Suite in Old Style