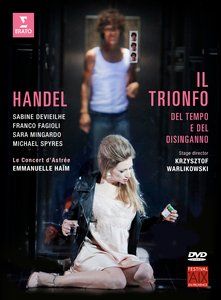 Festival d'Aix-en-Provence has firmly established itself as France’s preeminent summer festival and is a key fixture on the international festival calendar. It is particularly in the field of opera that the Festival d'Aix-en-Provence continues to break new ground and this release from the 2016 festival demonstrates that. In this new staging – a coproduction with the Opéra de Lille, Théâtre de Caen – Emmanuelle Haïm directs Le Concert d’Astrée with a star-studded cast including Franco Fagioli, Sara Mingardo, Michael Spyres, and exclusive Erato artist Sabine Devieilhe.

Translated as “The Triumph of Time and Disillusionment” Handel’s first oratorio was one he would continue to revise throughout his life. The first version, heard here, was written and premiered in Rome in 1707 to a libretto by Cardinal Benedetto Pamphili. It tells the story of the narcissistic Bellezza, her relationship with the deceitful Piacere, and her journey towards goodness, truth and inner beauty. It famously includes “Lascia la spina”, the first version of an aria he recycled for his opera Rinaldo – “Lascia ch'io pianga” – arguably his most famous aria.