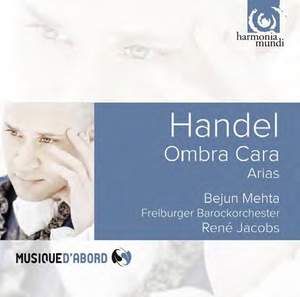 "one of the finest Handel opera recitals I have heard... evidence of a superior musician at the peak of his vocal powers. He has luxury support from the Freiburg Barockers and Jacobs, himself a former countertenor and a no less imaginative Handelian. The icing on this sumptuous cake is the gorgeous duet from Sosarme, in which Rosemary Joshua’s voice blends ideally with Mehta’s. A treat from start to finish."

"Recital discs devoted to Handel may abound at the moment, but few if any have been as comprehensively impressive as this one... It's wonderful singing and on this evidence, Mehta's beauty of tone and musical intelligence confirm his position in the highest echelon of contemporary countertenors, alongside the likes of David Daniels and Andreas Scholl."

“Bejun Mehta’s disc towers above the other Handel ‘medley’ recordings currently fashionable among opera stars. Musicality and a brilliant intelligence emanate from every track. Mehta and René Jacobs, by contrast, achieve a perfect meeting of musical minds…This is not just another aria collection, but a celebration of genius, in composition and performance alike.”