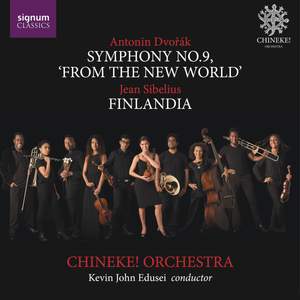 These performances are impressive. Ensemble is notably precise in Sibelius’s Finlandia, where the stern brass section and the tension of the strings provides the bedrock for a dynamic and highly... — BBC Music Magazine, September 2017, 4 out of 5 stars More…

David talks to the orchestra's founder about their first album, and about the relationship between European and non-European musical styles in Dvorak's famous 'New World' Symphony.

Signum are proud to present the debut recording from the Chineke! Orchestra, in a new live orchestral recording from The Royal Festival Hall, London. Drawn from exceptional musicians from across the continent, the orchestra is part of the Chineke! Foundation – a non-profit organisation that provides career opportunities to young Black and Minority Ethnic (BME) classical musicians in the UK and Europe. Their motto is ‘Championing Change and Celebrating Diversity in Classical Music.The orchestra is the brainchild of Chi-chi Nwanoku MBE, FRAM, who describes the project’s aim as being “... to create a space where BME musicians can walk on stage and know that they belong, in every sense of the word. If even one BME child feels that their colour is getting in the way of their musical ambitions, then I hope to inspire them, give them a platform, and show them that music, of whatever kind, is for all people.”In this first relesase in a new series, Chineke! orchestra perform two beguiling works – Sibelius’s Finlandia and Dvořák’s much loved Symphony No. 9 ‘From the New World’. Both pieces encompass different aspects of BME influences in Western Classical music: Sibelius’s Finlandia embodied a national sentiment in both the composer’s homeland of Finland as well as for other small nations seeking to free themselves from subjugation from other countries (becoming the national anthem of Biafra during the civil war of 1967-1970), and although underplayed by critics at the time, Dvorak’s work rings with melodies influenced by the folk music and spirituals sung to him by his African-American student and assistant, Harry Burleigh, and with rhythms and pentatonic sections inspired by the music of the Sioux Indians, all wrapped up in the format of a Western Classical symphony.

These performances are impressive. Ensemble is notably precise in Sibelius’s Finlandia, where the stern brass section and the tension of the strings provides the bedrock for a dynamic and highly motivated account. Individual wind soloists shine out in the Dvorak, notably Titus Underwood’s finely shaped cor anglais solo in the Largo, while the orchestra’s perception of the music’s charm and vivacity demonstrates a keen sense of character

After ponderous opening cello phrases, Kevin John Edusei conducts a fresh, lively account, full of sunshine. Ensemble is impressive, given the orchestral players have little experience playing as a unit … Titus Underwood’s cor anglais solo unfolds with natural tenderness and poise. Edusei keeps the Scherzo bubbling along nicely before a speedy, exuberant finale. This isn’t a performance to hold up against a Kubelík or an Ančerl favourite recording but that would be to miss the point. This is a bold statement of intent from an exciting ensemble. It would be great to hear Chineke! champion composers such as Samuel Coleridge-Taylor.

Although the ensemble sound is still taking shape (these things take years to percolate) what is missing in depth and burnish is compensated for in care and dynamism, in the lissom quality of quiet passages, in the tasteful restraint that keeps Finlandia unsentimental and gives the Dvořák a taut, explosive energy.

two old favourites are performed with real fire and finesse by Chineke! on a recording that is a little dry and boxy, but captures the impact of the playing...there’s a ferocious growl to the brass sound and some silky string timbres to enjoy.

This live recording of the works at the Royal Festival Hall, under the baton of Kevin John Edusai, oozes dynamism with fine playing in the quieter passages.