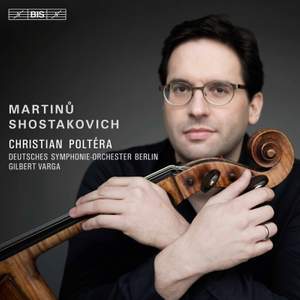 Poltéra gives a blazing account, bringing both eloquent shape and tonal richness to his melodic line…Wallfisch’s marvellous 1991 account with the Czech Philharmonic under Jiří Bělohlávek has... — BBC Music Magazine, December 2017, 4 out of 5 stars More…

The two cello concertos by Dmitri Shsotakovich were both written for his friend Mstislav Rostropovich but whereas the first is rhythmic and virtuosic, teh second is subdued and introverted. Composed in 1966, it is often regarded as a watershed work, heralding Shostakovich's final stylistic period marked by a certain sombreness and a trend towards more transparent scoring. The op. 126 concerto has become somewhat overshadowed by its older, more accessible sibling, something which also applies to the second work on this disc, for completely different reasons. Having compmleted his Cello Cocnerto No. 2 in 1945, Bohuslav Martinu was unsuccessful in his attempts to interest a leading cellist in promoting it. When the composer furthermore reworked his first cello concerto in 1955, the new version effectively obliterated all traces of the 1945 concerto, which didn't receive its first performance until 1965, six years after Martinu's death. The work is melodious with lyrical qualities, and many have interpreted it as an expression of the nostalgia the composer experienced as an exile in the U.S.A. during the last winter of the World War II.

Poltéra gives a blazing account, bringing both eloquent shape and tonal richness to his melodic line…Wallfisch’s marvellous 1991 account with the Czech Philharmonic under Jiří Bělohlávek has been a benchmark… Poltéra is a worthy successor as soloist, and they offer a swifter, more satisfying finale.

In this brilliant recording, Varga’s careful balancing of the orchestral instruments, often playing at the extremes of their range, opens up the sound and allows the cello to cut through the texture.

Poltéra's charisma is winning. The dash to the finish is electrifying. A beguiling work, ripe for rediscovery.