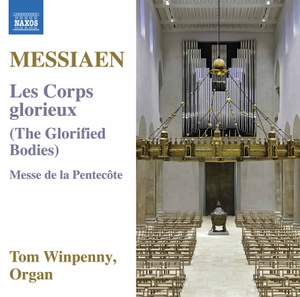 The newly renovated organ of Hildesheim Cathedral by Serifert provides an ideal tonal palette captured with both clarity and majestic space. Winpenny is on excellent form and his performances... — Choir & Organ, September 2017, More…

Olivier Messiaen was a towering figure in twentieth-century music, and for many years he considered Les Corps glorieux the favorite of his own works. It is recognized as the pinnacle of his pre-war organ compositions, vividly depicting the themes of resurrection through deeply expressive symbolism, life and death struggles and ecstatic joy. Ten years later the Messe de la Pentecote marked a departure in style, drawing on Messiaen’s liturgical improvisations and crystallizing his latest rhythmic and serial techniques and use of birdsong into a ground-breaking masterpiece. Organist Tom Winpenny is Assistant Master of the Music at St. Albans Cathedral, where he accompanies the daily choral services and directs the Abbey Girls Choir. Previously, he served as sub-organist at St. Paul’s Cathedral, London. He is also musical director of the London Pro Arte Choir. He has broadcast frequently on BBC Radio and featured on American Public Media’s Pipedreams. He was organ scholar at King’s College, Cambridge, graduating with a music degree, and twice accompanying the Festival of Nine Lessons and Carols, broadcast worldwide. As a soloist, he has performed in the USA, Europe, and throughout Britain. His wide-ranging discography includes music by Mozart, Liszt, John McCabe, and John Joubert.

The newly renovated organ of Hildesheim Cathedral by Serifert provides an ideal tonal palette captured with both clarity and majestic space. Winpenny is on excellent form and his performances are to be highly commended.