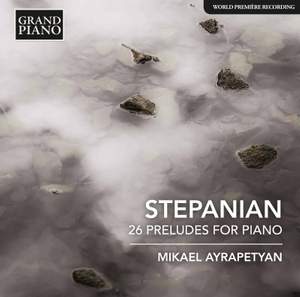 Prelude in A Major

Described by Aram Khachaturian as the greatest Soviet Armenian composer, Haro Stepanian followed the pioneering efforts of composers such as Komitas in establishing a strong national voice for Armenian music. He composed three symphonies, operatic works, numerous songs, chamber pieces, and works for piano. Building on the models of Chopin, Rachmaninov and fellow Armenians such as Komitas and Tigranian, the 26 varied and sharply contrasting Preludes are exquisite folk-influenced miniatures suffused with sadness, poetic contemplation, the natural world and scenes of Armenian life.