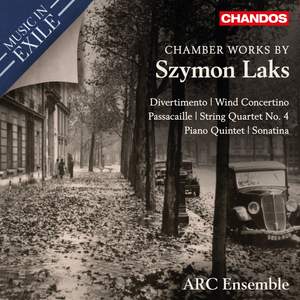 Poland’s young Messages Quartet play with warmth and bring out the true qualities of Lak’s quartet writing, including the transparency of No. 5…the slow movement of No. 3 is wistfully haunting.... — BBC Music Magazine, September 2017, 4 out of 5 stars More…

Following the Grammy nominated Volume 2 featuring the music of Fitelberg, the Canadian ARC Ensemble presents Volume 3 in its "Music in Exile" series, dedicated to the music of Szymon Laks. Born in Warsaw in 1901, Laks studied in Paris before being deported to Auschwitz-Birkenau. He soon joined and conducted the Auschwitz orchestra (his auditioning with a 'Jewish' work - Mendelssohn's Violin Concerto - went unnoticed). Although the trauma of his imprisonment left him alienated and reclusive, few of his works refer specifically to the Holocaust. A rather subtle, colorful and sometimes contrapuntal style emerges in his writing, notably represented in the early, elegant, Ravel-influenced Sonatina fo rpiano, in the later, melodic Passacaille, and the folk dances and songs woven into the cheerful String Quartet No. 4, as well as in the breezy, seemingly effortless Divertimento. These premiere recordings are a must-have, not only because of the compositional context and the quality of the music and its interpretations, but also because the unsparing eyewitness account that Laks gave of his imprisonment has eclipsed his musical legacy, leaving his works more than unjustly neglected.

Poland’s young Messages Quartet play with warmth and bring out the true qualities of Lak’s quartet writing, including the transparency of No. 5…the slow movement of No. 3 is wistfully haunting. This is fascinating music

These impressive performances are well-recorded, the Koerner Hall offering warmth and intimacy.

This collection of his chamber music – all claimed as premiere recordings, and sparkily played by the ARC Ensemble – speaks of musical development thwarted by an experience that only the inward-looking Passacaille of 1945 hints at. The 1927 Sonatina for solo piano, combining Chopin-like expansiveness with a dark-tinged French soundworld, is intriguing.

Laks's compositional fluency was remarkable. You're reminded of, among others, Shostakovich, Poulenc and Martinu, but these pieces have their own distinctive flavour and personality. Outstanding performances from the Canadian ARC Ensemble, and excellent sleeve notes.