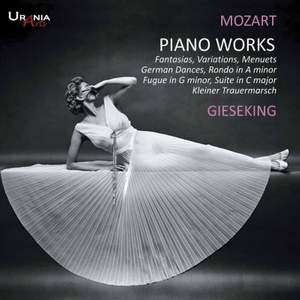 As we all know, Walter Gieseking was the first pianist to record the entire piano works of Mozart. This series was produced by the British Columbia and it consisted of no less than 16/20 LPs which have represented a reference point of Mozart’s chamber music discography. From this edition, we have taken all these “minor” but absolutely fundamental pieces (minuets, Variations, Fantasies, Rondos) that today are difficult to find together in one release. French-German pianist Walter Gieseking was largely self-taught. He was born in France and travelled with his family throughout Europe until he enrolled at the Hannover Conservatory where he studied under Karl Leimer until his graduation in 1916. In 1915 he made his debut in Hannover. He was drafted into the German army in 1916, but escaped combat by performing in his regimental band. After the war he undertook the life of a working musician, accompanying singers and instrumentalists, playing in chamber music ensembles, and working as an opera coach.He later became an advocate of new music, performing works by Arnold Schoenberg, Ferruccio Busoni, and Paul Hindemith. One of the most extraordinary pianists of his time, he never practiced, except in his mind. He would study the score, imagine playing it, and then perform it flawlessly.