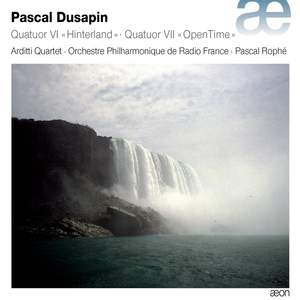 With this album coupling his Sixth and Seventh string quartets, the æon label completes its recording of all the quartets of Pascal Dusapin with the Arditti Quartet. This second release follows the earlier recording of his first five works in the genre, released in 2009. Complicity, transmission, comprehension: Pascal Dusapin’s output has been so familiar to and closely associated with these musicians since the 1980s (six of the works were composed for them) that it has become inseparable from them. The present edition reveals a trajectory that has lasted more than thirty years now and has established a coherent corpus over time. It helps the listener to grasp some of the composer’s deep-seated aspirations and the evolution of his style. The Arditti Quartet enjoys a worldwide reputation for their spirited and technically refined interpretations of contemporary and earlier 20th century music. Many hundreds of string quartets and other chamber works have been written for the ensemble since its foundation by first violinist Irvine Arditti in 1974. Many of these works have left a permanent mark on twentieth century repertoire and have given the Arditti Quartet a firm place in music history. Over the past thirty years, the ensemble has received many prizes for its work. They have won the Deutsche Schallplatten Preis several times and the Gramophone Award for the best recording of contemporary music in 1999 and 2002. In 2004 they were awarded the ‘Coup de Coeur’ prize by the Academie Charles Cros in France for their exceptional contribution to the dissemination of contemporary music.

Both pieces reaffirm Dusapin’s quartet cycle as among the most significant now emerging.

In both essays, intricate, repetitive figuration predominates, suggesting an aesthetic of textural relentlessness.

Quatuor VI, subtitled Hinterland, isn’t a string quartet at all, but rather a work for quartet and orchestra...The remarkable Quatuor VII, Open Time, is on a different scale. It’s a huge set of 21 variations, lasting nearly 40 minutes in the Ardittis’ magisterial performance.