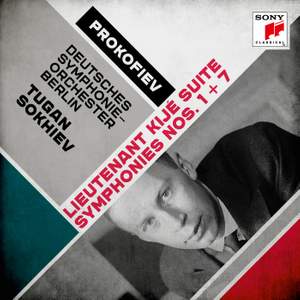 [Sokhiev] is certainly mindful of the parody rife in Lieutenant Kijé and the militaristic colours heralding the ‘virtual’ hero’s birth are painted in bold strokes with cartoonish thwacks on the... — Gramophone Magazine, August 2017 More…

I. Birth of Kijé

The first recording of the Prokofiev Symphony No. 5 by DSO Berlin directed by Tugan Sokhiev captured international attention (5 stars from Fono Forum). Now a new recording is being released of Prokofiev’s Symphonies Nos. 1 and 7 as well as the “Lieutenant Kijé” Suite. The First Symphony is easily the most famous orchestral work by the Russian composer. The work is marked by joyfulness, vitality, and refined rhythm. At the same time, Prokofiev surprises listeners with a compositional style reminiscent of the music of Joseph Haydn. Prokofiev’s Seventh and final symphony also features the compositional style of Haydn, thus creating a link between his first and final symphony. The work is captivating because of its Oriental tonal landscape, expressive instrumentation full of striking effects and overwhelming, sumptuous orchestral splendour. The program is rounded off by an exceptional recording of the Lieutenant Kijé Suite. Initially composed as a film score, today this work still fascinates concert-goers all over the world. The fourth movement in particular will be familiar to most listeners as a well-known Christmas theme.

[Sokhiev] is certainly mindful of the parody rife in Lieutenant Kijé and the militaristic colours heralding the ‘virtual’ hero’s birth are painted in bold strokes with cartoonish thwacks on the bass drum like a 21-gun salute. The Romance is cut of coarse cloth, a little on the sleazy side, and ‘Kijé’s Wedding’, with its comically pompous trumpet and tuba alliance, hints at a dowdy (cue saxophone) provincial affair

The young Russian’s laid-back style is far removed from, say, Gergiev’s in this repertoire, but it brings rewards in the composer’s two most “classical” symphonies, packed with witty pastiche and rollicking high jinks.