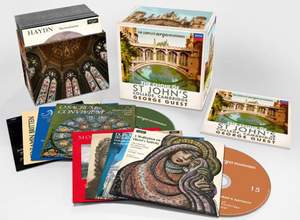 Recorded in the chapel of St John’s College, Cambridge

Performance practice may have changed in some areas, but there’s nothing dated about the deeply satisfying blend of vocal timbres and the acoustic in which it’s all recorded, as we hear Guest’s... — BBC Music Magazine, August 2017 More…

Locke: The King Shall Rejoice

Locke: When the Son of Man shall come in all His Glory

Humfrey: O give thanks unto the Lord

Humfrey: By the waters of Babylon

Purcell: They that go down to the sea in ships, Z57

Orr, R: They that put their trust in the Lord

Purcell: Thy word is a lantern unto my feet, Z61

Nares: The souls of the righteous

Goss, J: If we believe that Jesus died

In almost a quarter-century of recordings up to 1981, Decca’s Argo imprint established St John’s College Cambridge under conductor George Guest as one of the leading choirs in the world, standing shoulder-to-shoulder with their collegiate rivals King’s College Cambridge, but with a distinctly vibrant, less ethereal sound and with a broader European repertoire. The result: 42CDs, here proudly presented in their original jackets with extensive new editorial and photographs.

The complete recorded legacy on Decca of one of the most influential music directors of English Cathedral music.

42 CDs, mastered from the original tapes, and presented with original jackets.

Extensive booklet notes with photographs from the College’s archives and from George Guest’s personal family archives.

Performance practice may have changed in some areas, but there’s nothing dated about the deeply satisfying blend of vocal timbres and the acoustic in which it’s all recorded, as we hear Guest’s influence passed from generation to generation. It’s a vital, timeless legacy.