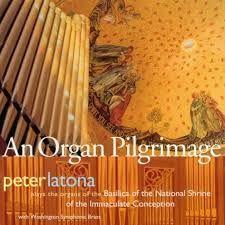 Peter Latona (Organ at the National Shrine of the Immaculate Conception, Washington)

Hovland: Toccata 'Now Thank We All Our God'

Peter Latona plays the four organs of the National Shrine of the Immaculate Conception, spectacularly recorded by Emmy Award-winning engineer Ed Kelly. In the vast and grand acoustics of the main church, each of three organs is played individually (south gallery organ, chancel organ, and Positiv organ built by M. P. Möller in 1969 and 1984 with about 120 ranks altogether), then the three are joined by the fine Washington Symphonic Brass for the rousing Gabrielli and Litaize works. The fourth organ heard is the fine and much admired Schudi 3-29 tracker in the acoustically fine Crypt Church. Latona, director of music at the National Shrine, plays beautifully, with Robert Grogan and Paul Hardy playing at mulitple consoles in the Gabrieli. A sonic blockbuster!