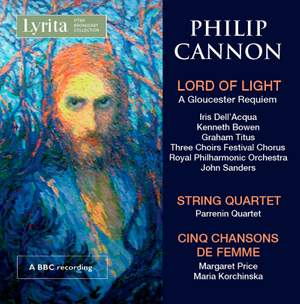 Philip Cannon’s catalogue embraces a broad range of genres from operas and symphonies to songs and keyboard works. His first significant pieces were written whilst he was still a student at the RCM. Musicologist Rollo Myers wrote of Philip Cannon, ‘One is conscious of a strong and instinctive musical personality and a purposefulness which excludes all irrelevancies and anything in the nature of “padding” ... in listening to his music one is never conscious of any deliberate striving for effect; what one hears is a direct and personal utterance’. Each of the three works presented here demonstrate that powerful combination of clarity and originality. The music is an extension of the man – unaffected, fearlessly independent and emotionally honest - and he was unsparing of himself in his quest to realise the full potential of his material. As Cannon himself put it, ‘it is what the music says that counts in sincere compositions, and this should be said as simply, lucidly and directly as possible, and should flow inevitably’. Paul Conway