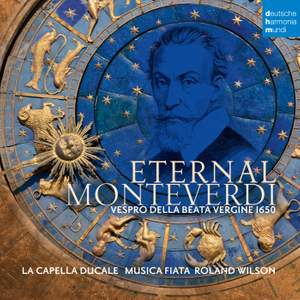 La Capella Ducale move through each shift of gears with expert ease, whether singing subtly nuanced ‘choral’ tutti passages (such as the suspension-laden concluding ‘Amen’ of the ‘Dixit Dominus’)... — Gramophone Magazine, June 2017 More…

Claudio Monteverdi, whose 450th birthday is being celebrated by the world of classical music in 2017, was one of the most important composers in the history of music. His impressive output had a major influence on the course of music history and still thrills listeners today with the incomparable quality of his compositions. One of his greatest sacred works is Vespro della Beata Vergine from 1610, yet there is another excellent work which has been overlooked until today: the Vespers for the Blessed Virgin from 1650. This work stands out for its wide range of affects, astounding vocal and instrumental combinations, its richness of virtuoso coloraturas as well as its stark musical contrasts. In this setting, Monteverdi creates a unique connection between the polyphonic style of the Renaissance and the wide range of affects characteristic of Baroque style. In addition, a special feature of this work is that instead of the antiphons customary at the time, the music publisher Alessandro Vincenti added not only Monteverdi’s Motets from 1624, but also five outstanding works by contemporary composers: Giovanni Rigotti (1613–1648), Alessandro Grandi (1577–1630) und Massimiliano Neri (1623–1673). This recording by the singers and musicians of Capella Ducale and Musica Fiata directed by Roland Wilson makes an outstanding contribution to Monteverdi’s 450th birthday.

La Capella Ducale move through each shift of gears with expert ease, whether singing subtly nuanced ‘choral’ tutti passages (such as the suspension-laden concluding ‘Amen’ of the ‘Dixit Dominus’) or intimate solo ‘concertos’…[Musica Fiata] yield a sunny brilliance in the upper range of sonorities