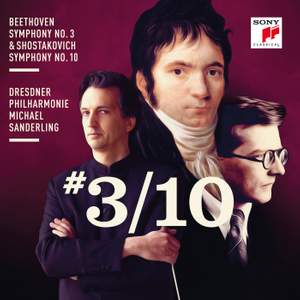 The Dresdner Philharmonie is one of Germany's major orchestras and has laid, together with his Principal Conductor Michael Sanderling, its focus on recording the complete cycle of symphonies by Ludwig van Beethoven (1770-1827) and Dmitri Shostakovich (1906-1975). After having released Beethoven's and Shostakovich's symphonies nos. 6 in 2015, for which the orchestra has received positive reviews, this recording is the second album from the cycle. Michael Sanderling decided to pair Beethoven's symphony no. 3 and Shostakovich's symphony no. 10 because of the similar motivation of both composers: to display the current political situation, i.e. Napoleon's reign and Stalin's dictatorial regime. A x2 CD set on the 'Sony Classical'.