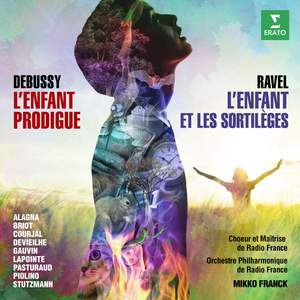 Briot is well contrasted with the excellent Nathalie Stutzmann as Maman and two other characters, while Sabine Devielhe as The Fire and François Piolino as Mr Arithmetic are first class. In the... — BBC Music Magazine, August 2017 More…

Recorded live in Paris, two contrasting music dramas on the theme of an errant child, written by two supreme French composers and performed by a starry line-up of francophone singers. Mikko Franck, in his role as Music Director of the Orchestre Philharmonique de Radio France, conducts Debussy’s L’Enfant prodigue, starring Roberto Alagna and Karina Gauvin, and Ravel’s L'Enfant et les sortilèges, with Nathalie Stutzmann and Sabine Devieilhe among the singers surrounding Chloé Briot in the role of the Child.

Complementing the two vocal works is the world premiere recording, made under studio conditions, of British composer Colin Matthews’ orchestration of Debussy’s Symphony in B minor. The work, which survives only as a manuscript for piano duet, was composed even earlier than L’Enfant prodigue, when Debussy was just 18, but it was not published until 1933, 15 years after his death. This orchestration of the Symphony in B minor was first heard in 2009. Colin Matthews is something of a Debussy specialist, having made admired orchestral transcriptions of all the composer’s piano Préludes, some of which have been recorded by Sir Simon Rattle and the Berliner Philharmoniker.

Briot is well contrasted with the excellent Nathalie Stutzmann as Maman and two other characters, while Sabine Devielhe as The Fire and François Piolino as Mr Arithmetic are first class. In the orchestra, every note is in place – no small achievement in this fiendishly difficult piece.

The casting [in the Ravel] is very strong, with bags of character, from Nathalie Stutzmann’s molasses contralto as Maman…to François Piolino’s demented Arithmétique and feisty teapot…Chloé Briot kicks up a storm as the Child…Franck’s cast is even more luxurious than for the Ravel. Karina Gauvin, as Lia the mother, reins in her powerful soprano for a moving opening air, while Roberto Alagna’s open-hearted, sunny tenor and excellent diction make for the best Azaël now on disc

[L’Enfant Prodigue] is vivid enough, but inevitably it’s L’Enfant et les Sortilèges that makes the bigger impression. In this jewel-like work in which not a note is wasted, it’s a huge advantage to have an entirely Francophone cast, and every word certainly matters here.