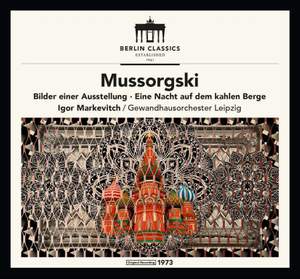 Mussorgsky: Pictures at an Exhibition & Night on Bald Mountain

Igor Markevitch enjoys a legendary reputation. He was successful both as a conductor of leading orchestras and as a composer and (university) lecturer. His pupils include Daniel Barenboim, Herbert Blomstedt and Wolfgang Sawallisch. In his autobiography Die Musik – mein Leben (music, my life) Barenboim recalls that Igor Markevitch had taught him “a personal, highly individual style of conducting”. In his Salzburg course he was “completely preoccupied with the clarity of the sound, the clarity of the rhythm and the clarity of the gesture”.

In many ways it was these characteristics that Markevitch introduced to the collective consciousness of the orphaned late-60s Gewandhaus orchestra. 1968 had seen Václav Neumann resign his position as conductor in protest at the suppression of the “Prague Spring” and its echo in the publications of East Germany’s ruling Socialist Unity Party. Despite his short term of office, Neumann was able to advance from the Konwitschny era with a new approach to programming and a new style – by means of new or additional core repertoire and a leaner, more highly articulated sound. Markevitch was the ideal person to continue this task.

Markevitch laid down his understanding of maintaining tradition through renewal with his 1973 Eterna recording of a work that is one of the world’s best known: Mussorgsky’s Pictures at an Exhibition in Maurice Ravel’s orchestration. Ravel’s version has clearly acquired more of a patina than the original piano version written half a century earlier, as even a first hearing of Markevitch’s recording proves. His interpretation suggest an imagined reorchestration of Mussorgsky’s work – rough and angular rather than polished and elegant. Without any patina. There is another work which was recorded for this production – Mussorgsky‘s symphonic poem Night on Bald Mountain.