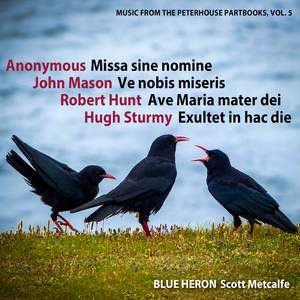 Settling into consistency of a very high standard, this is the choir’s finest disc yet, with the anonymous Missa sine nomine, restored by Nick Sandon, as a particular highlight — Choir & Organ, May 2017 More…

David talks to the founder and artistic director of Renaissance vocal ensemble Blue Heron about the culmination of his project to record lost pre-Reformation choral works from the Peterhouse Partbooks.

Volume 5 of the acclaimed series, Music from the Peterhouse Partbooks, contains the world premiere recording of a Mass by an anonymous English composer from the first half of the 16th century. Since the source of the cantus firmus has not been identified, the Mass remains without a name ("sine nomine"). The disc also includes an antiphon addressed to St. Augustine of Canterbury which is the only surviving work of Hugh Sturmy , a short and dramatic Ave Maria mater dei by Robert Hunt , whose Stabat mater is a highlight of vol. 3 of the series, and the sonorous and captivating Ve nobis miseris by John Mason , for men's voices in five parts. This recording is part of a 5-CD project which began in 2010. (Volumes 1-4 of the series were released with catalog numbers BHCD1002, BHCD1003, BHCD1004 and BHCD1005).

Settling into consistency of a very high standard, this is the choir’s finest disc yet, with the anonymous Missa sine nomine, restored by Nick Sandon, as a particular highlight

Blue Heron are a multivalent group. Here they sing with two or three voices to a part, using adult trebles for the top one...At full stretch there isn’t a weak link from top to bottom, and at their best (that is, usually) the trebles stand comparison with those of far better-known ensembles either side of the Atlantic: try the Mass that forms the centrepiece here...I doubt whether I’ll be alone in thinking this one of the discoveries of the year.