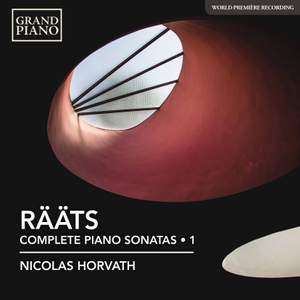 Jaan Rääts has written prolifically for the piano and his ten sonatas, spanning half a century, reveal his sophisticated control of expressive gestures. The composer himself has said: “I don’t like rigid systems. I like absorbing musical material, filtering it, emotionally developing it as needed. Using it as a springboard for my imagination… ”

NICOLAS HORVATH has developed a strong working relationship with Jaan Rääts, and has performed Rääts’ works on behalf of the Estonian government on several occasions, such as the World Expo in Milan in 2015. More concert engagements have been planned for this year, being Jaan Rääts’ 85th birthday, and the composer is also currently composing a piano sonata to be dedicated to Nicolas.

Recognized as a leading interpreter of Liszt’s music, Nicolas Horvath has in recent years become one of the most sought after pianists of his generation. Holder of a number of awards, including First Prize of the Scriabin and the Luigi Nono International Competitions, he frequently organizes events and concerts of unusual length, sometimes over twelve hours, such as Philip Glass’ complete piano music or Erik Satie’s Vexations, and composers from a number of countries have written for him. Nicolas Horvath is a Steinway artist.