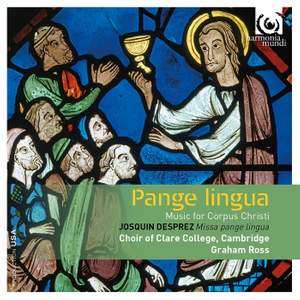 The Clare College performance of Josquin’s Missa Pange lingua which opens this recital has the kind of subtlety that can only be achieved by exceptionally responsive singers, immersed in the... — BBC Music Magazine, July 2017, 4 out of 5 stars More…

Continuing its series of music for the liturgical year, the Choir of Clare College now turns its attention to the feast of Corpus Christi, with a number of pieces setting the hymns of St Thomas Aquinas. Considered one of the Catholic Church’s greatest philosophers and influential theologians, Aquinas (c.1225–74) led a busy life of study, teaching and travelling. In 1264, at the request of Pope Urban IV, he wrote five Eucharistic hymns at the institution of the Feast of Corpus Christi. Within these relatively brief writings – just 188 verses in total – Aquinas has gained himself the reputation of being one of the great ecclesiastical poets.

Corpus Christi remains as one of the most important days in the liturgical calendar: it emphasises the joy of the institution of the Eucharist, having previously been observed only on Maundy Thursday in the sombre atmosphere of the forthcoming Good Friday.

The centre-piece of this CD is a complete performance of Josquin’s Missa Pange lingua, [c1515-21] one of the earliest masses and which heralded the Renaissance. The programme ends with Finzi’s ecstatic 'Lo, the full, final Sacrifice'. The piece was commissioned by the great Reverend Walter Hussey (also responsible for commissioning major works by Benjamin Britten, Henry Moore, Graham Sutherland, Leonard Bernstein and others); Finzi composed it directly after the Second World War in 1946 for the 53rd anniversary of the consecration of St Matthew’s Church, Northampton, where Hussey was vicar. Franncis Grier’s setting of 'Panis Angelicus' was composed in 2015 in memory of David Trendell, Director of Music of King’s College, London, who died suddenly in 2014 at the age of 50.

The Clare College performance of Josquin’s Missa Pange lingua which opens this recital has the kind of subtlety that can only be achieved by exceptionally responsive singers, immersed in the idiom of the music they are performing…of the nine other works on this CD, Victoria’s Lauda Sion salvatorem and La Rue’s O salutaris hostia are particular highlights

Josquin's Missa Pange lingua is sung tenderly with a bright, luminous tone. These young singers display an impressive sense of style...this is one of the best choral performance of this Mass on record. There is little doubt that this choir has an enviable appetite for 20th-century music and they are at their strongest in the two French settings of O sacrum convivium by Villette and Messiaen.

all the performances here are first rate. The choir is flexible and responsive. The programme requires them to master a variety of musical styles and under the assured direction of Graham Ross I don’t think they put a foot wrong. This is another fine and discerningly planned addition to their discography.