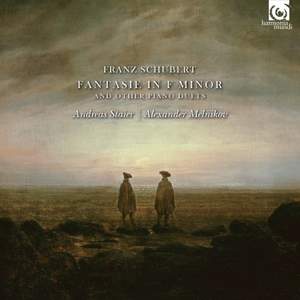 Andreas Staier and Alexander Melnikov play all these pieces with admirable poetry and intimacy…this new recording has the advantage of being played on the type of instrument Schubert would have... — BBC Music Magazine, July 2017, 5 out of 5 stars More…

"I have composed a big sonata and variations for four hands, and the latter have met with a specially good reception here, but I do not entirely trust Hungarian taste, and I shall leave it to you and to the Viennese to decide their true merit" So wrote Franz Schubert in 1824, evoking the popular 19th-century genre for 4-hands piano that publishers were always pestering him to write for. In his brief life Schubert devoted 32 compositions to this form and the least of these pieces, be it a ländler, polonaise or march, radiates with all of his finesse and sensitivity. Three are incontestable masterpieces, in the same rank as his sonatas or quartets: the Variations D813, the Fantasie D 940 and the Rondo D 951. All three date from the composer’s final years, a period that gave birth to his most accomplished works.

In concert, Andreas Staier and Alexander Melnikov have played Bach’s 'Well-Tempered Clavier', with Staier at the harpsichord, alongside Shostakovich’s '24 Preludes and Fugues', with Melnikov at the piano. Sharing a keyboard evidently suits them just as well; their unique musical complicity bringing together four hands and two immense talents.

Bringing together two of the most individual pianistic brains around, giving them a copy of a Graf fortepiano and putting Schubert in front of them was always going to be interesting...The Allegro vivace [of D940] goes with real oomph, and in their reading as a whole they explore the work's contrasts to vivid effect...A compelling addition to the Schubert duet discography.

The Graf-style fortepiano’s clarity brings out the fabulous textural richness of the F minor Fantasy’s third movement and the Rondo in A, illumined by the players’ lovely touches.

The sound is more intimate, more spruce; high notes have a pearliness that make the melodies really ping, and whichever pianist is playing the upper part (I’m guessing Staier – something about those flourishes) adds dainty ornaments that make the whole thing feel partly improvised.

No other composer has left as large a legacy of piano duets as Franz Schubert. The excellent team of Andreas Staier and Alexander Melnikov present some of his greatest works in the medium…the muted soft pedal sounds of Christopher Clarke’s copy of a Graf fortepiano and the percussive effects that surface in the marches are a reminder of how piano makers once strove to extend the potential of their instruments with one-man-band style extras