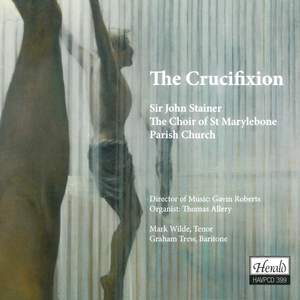 Stainer: And They Came to a Place Named Gethsemane (Tenor Recitative)

Stainer: The Agony (Tenor and Bass Solo and Chorus)

Stainer: And When They Were Come (Bass Recitative)

Stainer: The Mystery of the Divine Humiliation (Hymn)

Stainer: He Made Himself of No Reputation (Bass Recitative)

Stainer: The Majesty of the Divine Humiliation (Tenor Solo)

Stainer: And as Moses Lifted Up the Serpent (Bass Recitative)

Stainer: God so Loved the World (Chorus or Quartet a Cappella)

Stainer: Litany of the Passion (Hymn)

Stainer: So Thou Liftest Thy Divine Petition (Tenor and Bass Solo Duet)

Stainer: The Mystery of the Intercession (Hymn)

Stainer: And One of the Malefactors (Bass Solo and Male Chorus)

Stainer: The Adoration of the Crucified (Hymn)

Stainer: Is It Nothing to You? (Bass Solo)

Stainer: The Appeal of the Crucified (Chorus)

Stainer: After This, Jesus Knowing That All Things Were Now Accomplished (Tenor and Male Chorus Recitative)

Stainer: For the Love of Jesus (Hymn)

The third of his four oratorios The Crucifixion (1887) was dedicated by Sir John Stainer (1840–1901), then Organist and Choir Master of St. Paul’s Cathedral, to his ‘pupil and friend W. Hodge and the choir’ of St Marylebone Parish Church, who first performed it on Thursday 24th February 1887, the day after Ash Wednesday.

The Crucifixion has been performed at St Marylebone Parish Church every year since its first performance, and this live recording is sung by the choir of the church.

Sir John Stainer’s most widely known work takes us on an emotional and spiritual journey, and that journey is, of course, Christ’s journey, a journey towards the cross that awaits him on the hill of Calvary, Golgotha, the place of a skull, just outside the walls of Jerusalem.

Christ’s final journey was the very journey for which the Word of God became incarnate; the journey to which the whole of Jesus’ earthly ministry had, inexorably, been leading; a journey that fulfilled Christ’s destiny, revealed his glory, and completed God the Father’s plan for creation’s salvation.

This is the first performance recorded in the place for which it was written since the 1999 recording made by the English Chamber Choir. 2017 marks the oratorio’s 130th Anniversary as well as the 200th anniversary of the present parish church and the 900th anniversary of Christian worship in the parish that was, in the fifteenth century, to become St Marylebone.