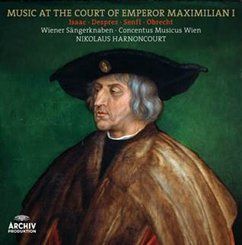 Music at the Court of Emperor Maximilian I - Vinyl Edition

When Nikolaus Harnoncourt died in March 2016, the music world lost one of its most influential and charismatic conductors. Harnoncourt was a pioneer of historically informed performances and the repertoire is enriched for the approach it took to it. Deutsche Grammophon commemorates the first anniversary of his death in March 2017, presenting two of his legendary recordings again on vinyl.

Harnoncourt’s landmark 1963 recording of secular, sacred, vocal and instrumental pieces of the High Renaissance from the Court of Emperor Maximilian I – Heinrich Isaac, Josquin Desprez, Ludwig Senfl, Jan Obrecht, and others

Including original repertoire notes by Harnoncourt from the 1964 LP release, including notes about musical sources and the period instruments, with sung texts and translations (English/German/French).