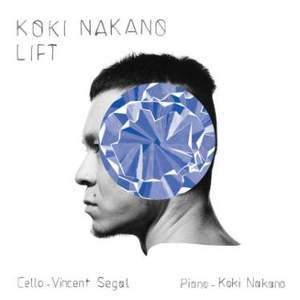 Nakano: Supposed to Be a Mistake

Lift' is an album in which Young Japanese pianist/composer KOKI Nakano constructs his own musical world. Piano and cello combine in a selection of beautiful pieces, where Nakano draws on his classical background whilst weaving in other influences, using repetitive and rhythmic elements of jazz and creating layers of sound inspired by pop and electronic music.

Vincent and Koki worked on the album in a tiny studio in the Les Buttes Chaumont neighbourhood of Paris, finding a way to communicate through music, as Vincent describes it: "it's a wonderful thing to spend hours rehearsing the music of Koki Nakano without being able to talk to him in any serious way: no Japanese, no French, no English, no diplomacy, just a territory – the art of Koki Nakano".

Koki Nakano was born in Fukuoka, Japan, in 1988 and studied at the prestigious music school Toho Gakue and at Tokyo's University of Arts where he formed electro-rock band Gas Law whilst also composing classical pieces for fashion shows and ad campaigns. He now lives in Paris and performs all over the world. Vincent Segal is a conservatoire musician with a highly successful career. Born in Reims, he studied at the National Music Academy of Lyon and is well-known for his many outstanding collaborations with artists such as Ballake Sissoko, Elvis Costello, Carlinhos Brown, Sting, Salif Keita and now, Koki Nakano.