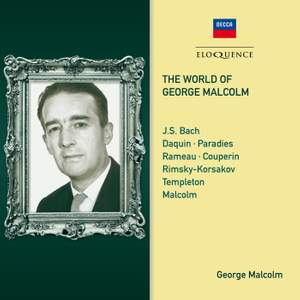 The World of George Malcolm

This little disc […] fully deserves to be a best-seller. George Malcolm is in spanking form … The Paradies Toccata […] is dazzling, and would have struck its composer rather as a supersonic jet... — Gramophone Magazine, December 1962 More…

The Flight of the Bumble-Bee

Malcolm: Bach before the mast (The Sailors' Hornpipe played in the style of Bach)

There were many worlds in George Malcolm’s (1917–1997) universe – organist, harpsichordist, pianist, composer, choral director and conductor – and this one demonstrates his unique skill as a solo performer who, throughout his career, more than any other individual defined the harpsichord’s identity in England. After World War II Malcolm became the most famous English harpsichordist of his day, with a brilliant technique, superb musicianship and an idiosyncratically modern approach to playing which, for his audiences, came to exemplify the very nature of the instrument itself. In celebration of the centenary of his birth (28 February 1917).

A series of four releases on Decca Eloquence, which includes CD premieres, pays tribute to this fascinating artist on his many recordings for Argo in the 1960s. The items on this collection were all recorded on several different examples of Thomas Goff’s instruments and demonstrate his brilliance as a performer as well as the aesthetic which he and Goff cultivated together. All of the works by Bach included here are taken from a 1961 Decca release (SXL 2259), which made quite an impression when it first appeared, its extraordinary use of frequent registration changes and crescendo/decrescendo effects astonishing even those critics who were used to the ‘Landowska’ style of modern harpsichord playing. In addition to the Bach works that form its core, this anthology demonstrates Malcolm’s approach to French harpsichord music. Malcolm’s art as arranger and composer is also documented here by way of his truly astonishing version of Rimsky-Korsakov’s Flight of the Bumblebee, and his own ingenious fugal fantasia on the Sailor’s Hornpipe, Bach before the Mast. Notes are by Peter Watchorn, an Australian-born, US-based harpsichordist, one of whose teachers, Harold Lobb, was also an associate of Malcolm.

This little disc […] fully deserves to be a best-seller. George Malcolm is in spanking form … The Paradies Toccata […] is dazzling, and would have struck its composer rather as a supersonic jet would have struck Orville Wright … As for the Bumble-bee, this is one of the most coruscatingly brilliant transcriptions ever