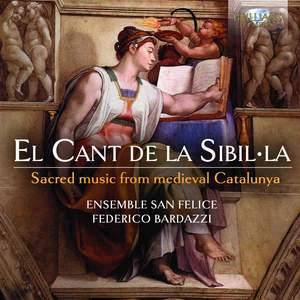 This fascinating programme attempts to depict an imaginary coming together of pilgrims from various countries on their way to celebrate Christmas Mass at the Catalan monastery of Montserrat, one of the strongest bastions of Christianity in the middle ages. During the Matins on Christmas day a boy dressed up as the Sybil blindfoldedly sang the famous verses from pagan times predicting the coming of Christ and the end of the world (this practice was later forbidden by the Council of Trent).

Federico Bardazzi and his vocal and instrumental group use copies of original instruments (based on detailed research). For the vocal parts they use a form of improvisation and ornamentation based on Christian, Arab and Jewish tradition, as was in the culture of the Iberian Peninsula in the middle ages.