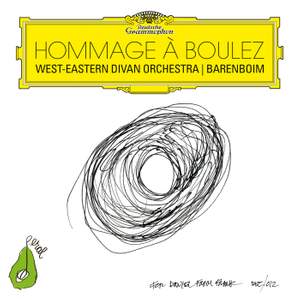 A superb tribute comprising live recordings of solo and chamber pieces…Le Marteau sans maître [is] conducted with age-defying vigour by Boulez himself and exquisitely sung by Hilary Summers…Dérive... — BBC Music Magazine, July 2017, 5 out of 5 stars More…

Hommage à Boulez celebrates Daniel Barenboim’s and Pierre Boulez’ association, starting in June 1964, that for length and multifariousness, has few parallels in the history of music. Boulez became the first musician that Barenboim invited to share in conducting the West-Eastern Divan Orchestra (in 2007, at the Salzburg Festival). Features a selection of Boulez’ most iconic works out of live recordings from the BBC Proms Beethoven-Boulez cycle of concerts (London, Royal Albert Hall, July 2012), and Boulez’s 85th birthday concert (Berlin, Staatsoper Unter den Linden, 4 April 2010), all performed by members of the West Eastern Divan orchestra. Boulez conducts members of the WEDO and Hilary Summers in his own work Le Marteau sans maître.

A superb tribute comprising live recordings of solo and chamber pieces…Le Marteau sans maître [is] conducted with age-defying vigour by Boulez himself and exquisitely sung by Hilary Summers…Dérive 2 is simply breathtaking: in compositional scope and its precise yet fluid performance by the 11 virtuosos soloists under Barenboim’s taut direction

By my reckoning, this is Boulez’s fifth recording of [Le Marteau Sans Maître] that defines his own music better than any other; it’s perhaps more expressively flexible than earlier ones, but just as precise, and Summers makes a compelling soloist.

Boulez, who died in 2016, gets quite the tribute here with more than two hours of music, including “Le Marteau Sans Maître.” That score might frighten some young musicians; here, the contralto Hilary Summers and members of the West-Eastern Divan Orchestra are fearless.