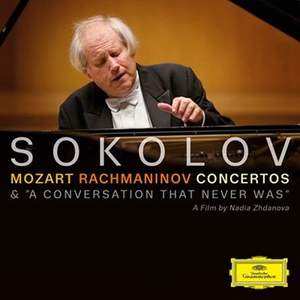 Sokolov is now on a don't-touch-me pinnacle...the two concertos here present the zenith of his art. An ideal partnership with the Mahler Chamber Orchestra under Trevor Pinnock's direction performing... — BBC Music Magazine, June 2017, 5 out of 5 stars More…

Recording of the Week,  Grigory Sokolov performs piano concertos by Mozart and Rachmaninov

James enjoys the rare delight of a pair of concerto recordings by the Russian pianist, with the Mahler Chamber Orchestra and BBC Philharmonic Orchestra accompanying.

CD + DVD (The complete concerto performances are CD-only; the DVD consists of the documentary "Grigory Sokolov: A conversation that never was" by Nadya Zhdanova on DVD (59 Minutes; R/E/D/F)

This release – set for March 2017 – is a piece of history: it is a combination of unreleased and historic audio and visuals. It allows a unique view of the enigmatic maestro Grigory Sokolov’s life because it offers an opportunity to hear authentic performances from over ten and even twenty years ago accompanied by a brand-new film by Nadia Zhdanova.

Commenting on that very performance of Mozart’s Piano Concerto K 488, the Salzburger Nachrichten noted that “Such is his intensity that Sokolov sweeps everything and everyone along with him”.

The Independent described his reading of Rachmaninov’s Third Piano Concerto as “ecstatic” and as “an outstanding performance”, while The Times wrote that “Sokolov swept through the concerto like a hurricane”.

These historic performances, will be published in combination with a unique documentary, which looks back on both Sokolov’s artistic and private biography. Whilst Sokolov is well known for being reclusive and rarely giving interviews, filmmaker Nadya Zhdanova achieved the impossible: She spoke with his friends, with colleagues and eventually was allowed to use private material from Sokolov’s archives.

She discovered rare and unreleased video footage (i.e. including Sokolov winning the Tchaikovsky competition in 1966), which offers an intimate insight into the life of Grigory Sokolov. The documentary is dedicated to Inna Sokolova the late wife of the artist. Both documentary and the booklet will feature poems by Inna Sokolova in four languages.

Sokolov is now on a don't-touch-me pinnacle...the two concertos here present the zenith of his art. An ideal partnership with the Mahler Chamber Orchestra under Trevor Pinnock's direction performing Mozart highlights the playful grace of Sokolov's playing in the outer movements, and its rapt intensity in the Adagio. And the Rachmaninov goes like the wind.

Sokolov fans among live broadcast collectors..have long considered the pianist's 1995 Proms performance of the Rachmaninov Third a holy grail, and with good reason. Once past the deceptively sedate opening theme, Sokolov nonchalantly flies, taking the vertiginous passagework in suave stride in the manner of the composer himself and the late Zoltan Kocsis, yet accounting for plenty of buried motifs and inner voices.

About halfway through the first movement [of the Rachmaninov], the performance suddenly kicks into another gear altogether....Quite honestly, (and please forgive my overeffusiveness!), this performance is so terrifyingly and monumentally phenomenal that mere wrong notes and de-tuned instruments can do nothing to dent its effect!

Sokolov’s Rachmaninov playing is immense and, in its mix of supreme fluency and ardent intensity, easily bears comparison with the best versions available on disc. His account of K488 is just as compelling; the opening piano solo in the slow movement is as fine a demonstration as any of how less can mean so much more in a performance.