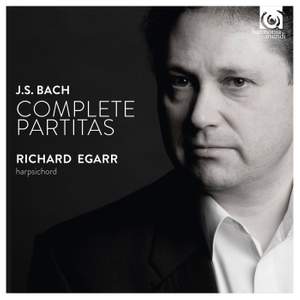 Egarr brings these styles to life with warmth and technical fluency. His phrasing is effectively punctuated and his declamation unhurried, allowing us to savour the music's intimately conversational... — BBC Music Magazine, May 2017, More…

Any composer’s Op.1 is a big deal. Bach modelled his own after Kuhnau’s 'Neue Clavier Übung', books 1 and 2 of which were published in 1689 and 1692. Bach’s ability to ‘see’ and create a long-term ‘project’ has its spooky beginnings here.

Although the music that inhabits the six Partitas was ready and waiting, rather than publish them together, Bach staggered their delivery. Partita 1 came in 1726, with the other five appearing gradually over the next four years, until finally in 1731 the entire six Partitas were presented as his ‘Clavir [sic] Ubung . . . Opus 1 . . . 1731’. Bach infuses this seemingly effortless music with godly patterns and personal algorithms of stunning brilliance. Many pages have been spent in the pursuit of secret codes in Bach’s music: for many, a contentious subject. Bach began by publishing Partita 1 in 1726 – when he was 41 years old. Needless to say the final movement of the set (the 41st movement), has as its theme a subject containing 14 notes. The family name not only gave rise to a direct musical melody [BACH = B flat/A/C/B natural], but for Johann Sebastian a pair of deliciously mirrored numbers with which he was wont to sign his name at beginnings and endings in particular. If A=1, B=2 etc. (I and J are counted as the same letter),

The above is wilfully paraphrased from Richard Egarr's own superb notes from this new recording of the Partitas; crowning his already extensive series of Bach's harpsichord works, and illuminating every one of their multiple facets.

Egarr brings these styles to life with warmth and technical fluency. His phrasing is effectively punctuated and his declamation unhurried, allowing us to savour the music's intimately conversational character

Adding only a modest amount of ornamentation, he invests the vitality of the dance with a deal of grandeur and colour. Others have approached the six Partitas with a more analytical grip on clarity and rhythm, but Egarr’s richly imagined performances bring their own rewards.

Egarr's Sarabandes are worth the price of admission. Unleashing imaginatively wrought embellishments with controlled freedom; I've never heard Egarr fuse heart, mind and fingers to such a soulful degree.

Egarr, playing a sonorous copy of a 1638 Ruckers harpsichord, phrases with unfailing elegance, the faster movements never too hard-driven, the sarabands poignantly poised.