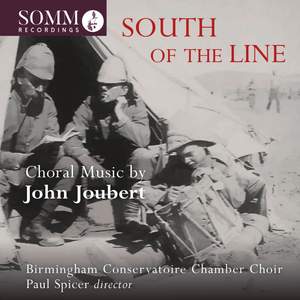 Offer, Joubert: South of the Line

Joubert’s disturbing anti-war statement South of the Line (1985) is the major work on this powerfully performed disc of the composer’s choral music. — BBC Music Magazine, May 2017, 4 out of 5 stars More…

No. 1. To Mistress Isabel Pennell

No. 2. To Mistress Margery Wentworth

No. 3. To Mistress Margaret Hussey

No. 5. A Christmas Ghost Story

SOMM’s celebration of John Joubert’s 90th birthday this month brings to the catalogue yet more new riches, this time no less than seven première recordings of his choral music. South of the Line (together with Autumn Rain) was recorded last June at the Birmingham Conservatoire and poignant is the fact that it was commissioned from the composer for the opening of the Adrian Boult Hall and the last music heard there for this recording, before its demolition.

Choirs are at the heart of John Joubert’s music and it is by his choral music that he seems to communicate most directly with audiences. He once commented. ‘Communication is important to me. I want to be understood, enjoyed and used’. It’s perhaps for this reason, this capacity for dramatic articulation of meaning, that his choral music holds such a certain place in the listeners’ hearts. Indeed he has composed choral music throughout his career winning, in 1952, a Novello Anthem competition with O Lorde, the Maker of Al Thing set to a poem by Henry VIII. The lullaby-like There is no Rose (1954) is another work with a firm place in the English choral repertoire, and another setting of an ancient text. Incantation, Pilgrimage Song and Three Portraits as well as Sonnet, This is the Gate of the Lord, Autumn Rain and Be Not Afeard, his most recent work a commission for Novello honouring the 400th anniversary of Shakespeare’s death, are all first recordings.

But perhaps the most powerful and extraordinary of all the works on this disc is South of the Line. Commissioned by Ex-Cathedra in 1985 it receives here a searing interpretation by Birmingham Conservatoire Chamber Choir under their conductor, Paul Spicer. Joubert uses texts from five poems by Thomas Hardy who wrote them in response to the outbreak of the Anglo-Boer War at the turn of the century. The music is an unabashed anti-war statement with a cataclysmic setting of words, consisting of equal parts grief and scathing irony, pitting the choir against a battery of percussion -- even the two pianos are essentially treated as drums. The music they evoke from the South African-English John Joubert is a compelling and a powerful indictment against the inhumanity of war.

Joubert’s disturbing anti-war statement South of the Line (1985) is the major work on this powerfully performed disc of the composer’s choral music.

It’s [South of the Line] intensity presents a challenging test to singers, and Paul Spicer guides his group to the heart of the composer, the frequently operatic approach of the sopranos coming into its own…memorable writing.

The writing is always full of rigour and, despite the obvious influence of Britten, it could never be parodied. Joubert almost always has a crafty solution in the final bar of a work or movement

This is a diverse collection of choral pieces by a master composer. All the music on this disc…is very fine indeed…This is a fine tribute to John Joubert as he marks his ninetieth birthday.