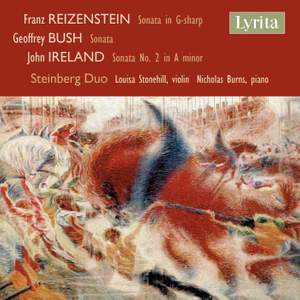 Ireland: Violin Sonata No. 2 in A minor

Violin Sonata No. 2 in A Minor: I. Allegro

Violin Sonata No. 2 in A Minor: III. In tempo moderato - Con brio

All three of these works were written at times of war. John Ireland's sonata was composed during World War One (1917) and was the work that established Ireland as a composer of note in the UK. The Franz Reizenstein and Geoffrey Bush sontatas come later, composed in 1945, and are far less well known. While all three works maintain a sense of melody and tonality, each composer finds room push boundaries. Bush's sonata receives its premiere recording in this release.