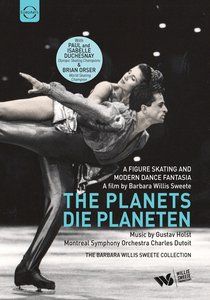 The Planets – A Figure Skating and Modern Dance Fantasia

A film by Barbara Willis Sweete

Set at Mount Olympus surrounded by a starry firmament, the elaborate ice and dance show is characterizing each of the Greek gods.

Music by Gustav Holst, performed by the Montreal Symphony Orchestra under Charles Dutoit.