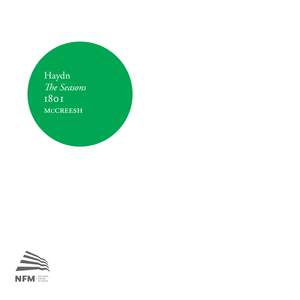 Spring: No. 3, From Aries Shines the Bright'ning Sun (Recitative)

Spring: No. 4, With Eagerness the Countryman Sets Forth (Song)

Spring: No. 5, The Countryman has Paid his Dues (Recitative)

Spring: No. 6, Heav'n be Gracious, Heav'n be Bounteous (Chorus with Solos)

Spring: No. 7, Our Fervent Pray’rs are Heard (Introduction & Accompagnato)

Spring: No. 8, O What Charming Sights Delight Us (Duet)

Summer: No. 12, The Village Lads and Lasses (Recitative)

Summer: No. 15, How Refreshing to the Senses (Aria)

Summer: No. 16, Behold, Arising Through the Sultry Air (Recitative)

Autumn: No. 18, That Which Spring has Promis’d (Introduction, Accompaniment & Recitative)

Autumn: No. 20, See How a Bunch of Eager Lads (Recitative)

Autumn: No. 24, A Tight’ning Circle of Hunters (Recitative & Accompaniment)

Autumn: No. 26, On Vines, the Grapes are Glistening (Recitative)

Winter: No. 28, The Jaded Year Now Fades Away (Introduction & Accompaniment)

Winter: No. 29, Light and Life are Enfeebl’d (Cavatina)

Winter: No. 32, And Drawing Near the Welcome Sight (Recitative & Accompaniment)

Winter: No. 34, Now the Flax has all been Spun (Recitative)

Winter: No. 35, A Noble Squire, of Great Renown (Song with Chorus)

Winter: No. 36, And From the East there Blows an Icy Blast (Recitative)

Winter: No. 38, Then Dawns that Morn so Glorious (Double Chorus with Solos)

Recording of the Week,  Paul McCreesh conducts Haydn's The Seasons

Katherine listens to Paul McCreesh's boisterous and vivid recording of Haydn's The Seasons, with the Gabrieli Consort and Players and the Wrocław Baroque Orchestra and Choir.

David talks to the conductor about his new super-sized recording of Haydn's pastoral oratorio with the Gabrieli Consort and Wrocław Baroque Orchestra.

The Gabrieli Consort continue their series of award-winning collaborations with the National Forum of Music, Wrocław, Poland with a new version of Haydn’s great oratorio The Seasons. Using a new performing edition by Paul McCreesh this recording is the first to feature the large orchestral forces that Haydn called for, including a string section of 60, 10 horns and a choir of 70. As well as the combined forces of the Gabrieli Consort & Players, Wrocław Baroque Orchestra and National Forum of Music Choir, the recording features solo performances from British singers Carolyn Sampson, Jeremy Ovenden and Andrew Foster-Williams.

All booklet texts are printed in both English and Polish translations.

The opening thunderous wallop on the timpani will warn you that this is a recording of some drama and punch...If you are not familiar with The Seasons, this is the recording to go for. Paul McCreesh's English translation is excellent, the singing and orchestral playing is outstanding.

What emphatically sets this Seasons apart from all previous recordings, whatever the language, is the scale…the big choruses, toppled by a shining, un-wobbly soprano line, generate a visceral excitement unmatched by any rivals. In the cataclysmic thunderstorm, rasping, minatory brass to the fore, the terrified populace evokes Verdi's 'Dies Irae', while the autumn hunt, raucously fuelled by anarchic natural horns, has never sounded more uninhibitedly exuberant. In the wine harvest, with its final tipsy fugue, McCreesh conjures a Burgenland bacchanalia to rival Jacobs -high praise indeed. McCreesh and his massed Anglo-Polish forces have given us a Seasons that thrillingly catches both the work's bucolic exhilaration and its invocations of the sublime. And for sheer sonic splendour it's in a class of its own.

McCreesh’s new translation is a triumph, and will surely have an illustrious career beyond this recording...One of the great joys of this set is the huge dynamic and emotional range afforded by the expanded forces – the introspective recitatives are, in their way, as spine-tingling as the 70-strong chorus belting out their lusty paeans to wine, women and weather.

Much is splendid: the big hunting, drinking and spinning choruses, for example

This successor to Haydn’s Creation has often felt in the shadow of the earlier masterpiece, but this recording brings it thrillingly to life. Avoiding the early-music tendency to small forces, Paul McCreesh assembles a massive throng of singers and players, the numbers that might have performed the piece in 1801. And what a noise they make!...McCreesh’s fresh new translation animates the top-class solo singing, while the massed choruses blow the roof off. Glorious.

Some of the most satisfying moments come from the fine orchestral playing, in particular featuring some exquisitely lovely wind playing.

the playing is magnificent… eloquence is consistently uppermost, stemming from McCreesh’s singular passion shared with musicians who likewise respond passionately to every facet… superlative, all-encompassing performance