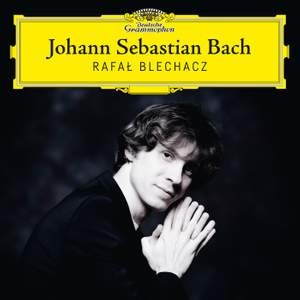 A disc that both bedazzles and bemuses — BBC Music Magazine, June 2017, 4 out of 5 stars More…

Celebrated by his Chopin awarded recordings and cited by critics as one of those talents that only come along every few decades - has now turned to Bach. The now 31-year-old winner of the 2005 International Chopin Piano Competition, has been immersed in Bach since his childhood and has cultivated a strikingly natural eloquence in his mature interpretations of the composer’s keyboard works.

This is the perfect album to show his versatility and fine knowledge of the works of the composer.

Rafal’s interpretation flows not least from his formative experience as an organist. Young Rafał cut his musical teeth on Bach’s principal instrument, playing organ for several years before turning full time to piano. In addition to playing for services at the main church in his hometown of Nakło nad Notecią, he also gave occasional recitals there long after becoming a pianist.

A disc that both bedazzles and bemuses

A strikingly personal programme…the Fantasia and Fugue in A minor is impressive, the latter a dazzling affair, not least for Blechacz’s sheer control over the textures at quiet dynamics…he is patently a pianist who enjoys Bach’s extremes…and his way with Bach’s counterpoint is unfailingly imaginative