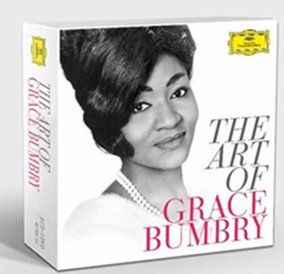 The Art Of Grace Bumbry

Handel: Messiah: O thou that tellest good tidings to Zion

Handel: Messiah: He was despised

Marking the 80th birthday of Grace Bumbry in January 2017, this box set celebrates her magnificent career across opera, oratorio and Lieder and soul in a handsome original jackets collection of 8CDs and a DVD of her legendary Carmen.

‘A strong-minded artist who has always done things in her own way, and who possesses the elusive yet unmistakable quality of charisma.’

With 8CDs and 1 DVD, this generously-filled cap box presents:

• A pair of 2CD sets of oratorios, including the first ever CD release of Israel in Egypt, and a first DG CD release of Judas Maccabaeus, newly remastered

• A DVD of her legendary 1967 film production of Carmen as part of a uniformly-strong quartet of principals including Mirella Freni as Micaela, accompanied by the Wiener Philharmoniker under Herbert von Karajan

• One DG Album of Lieder by Schubert, Brahms, Liszt, Wolf