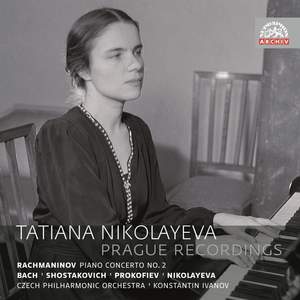 Recorded in Prague, some of these vivid and characterful performances are on CD for the first time and they’re a must-have for all pianophiles. — BBC Music Magazine, December 2017, 5 out of 5 stars

I. Etude in E Minor

II. Etude in B Minor

In the case of the pianist Tatiana Nikolayeva (1924-1993), that overused term “child prodigy” is entirely apt. She began playing the instrument at the age of three and started to compose music when she was 12. At the age of 13, she enrolled at the Moscow Conservatory, after graduating from which she intensively devoted to composition. The turning point in her career emerged in 1950; more significant in her career than winning the first edition of the J. S. Bach International Competition in Leipzig was her encounter with Shostakovich, which turned into a lifelong friendship. With her account of Bach’s music, Nikolayeva inspired Shostakovich to compose his 24 Preludes and Fugues, which she was the first to perform. In February 1951, Nikolayeva was invited to Prague to join the Czech Philharmonic and make a recording of Rachmaninoff’s Piano Concerto No. 2 and several Bach pieces.

The other Supraphon recordings (of works by Prokofiev, Shostakovich and Nikolayeva’s own Concert Etudes) were completed in April 1954. Notwithstanding the small number of Tatiana Nikolayeva’s performances recorded for Supraphon on magnetic tapes, their significance is indispensable indeed, as they represent virtually the oldest preserved testimony to the immense mastery of the legendary pianist, before she was discovered by the whole world.

Recorded in Prague, some of these vivid and characterful performances are on CD for the first time and they’re a must-have for all pianophiles.