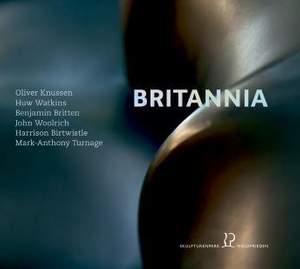 The Cragg Foundation’s first CD presents a programme of 20th and 21st century British composers. The line-up ranges from solo piano, two duets, a trio, a string quartet and a piano quartet by Mark-Anthony Turnage.

Turnage is considered to be the most successful of contemporary composers in Britain. His oeuvre combines elaborate stylistic elements from classical and jazz, modern and traditional and his rhythmically intense piano quintet Slide Stride is no exception. In complete contrast Turnage’s mentor Oliver Knussen penned with Prayer Bell Sketch a meditative work in memory of his Japanese friend and composer Toru Takemitsu.

The short Movement for string quartet by Harrison Birtwhistle expresses a complex, uneasy and almost threatening atmosphere. The listener becomes engrossed in the relentless pulse of the music. On the other hand, John Woolrich’s trio A Farewell for clarinet, viola and piano is a peaceful work with a straightforward structure.

38 year-old Huw Watkins is one of the younger British composers and a well-respected pianist. Chamber music plays an important role in his creative work.

It goes without saying that Britain’s most significant and omnipresent 20th century composer Benjamin Britten is also represented here. The famous cellist Mstislav Rostropovich was the source of inspiration for Britten’s wonderful Sonata in C for cello and piano.

The musicians on this CD are all members of the Wuppertal Symphony Orchestra or lecturers at the Wuppertal faculty of the Music Academy of Cologne. The CD was recorded in the Immanuelskirche in Wuppertal by recording engineer Ingo Schmidt-Lucas of Cybele-Records.

It’s pleasingly novel to find contemporary British music undertaken by German players...A highlight is Birtwistle’s brief Movement for String Quartet (1991): his originality leaps at you in the context.