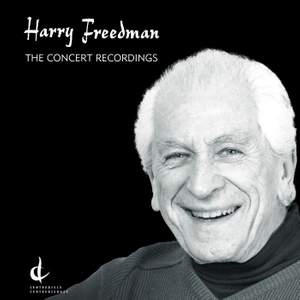 Harry Freedman (1922 – 2005) was a master of orchestration, an art that was informed by his 25 years as English horn soloist in the Toronto Symphony Orchestra. He wrote for many other genres, but his orchestral works contain much of his very finest work, a cannon that is not only large, but also diverse, both in style and creative approach. This compilation of orchestral works by Freedman displays five vivid examples of Freedman's imaginative approaches to orchestral composition, all recorded in live performances for broadcast on CBC Radio. Freedman was one of Canada’s most frequently performed composers. His output consists of some 200 compositions, including three symphonies, nine ballets, two hour-long stage works, as well as various works for orchestra, choir, chamber groups, and much incidental music for stage, TV and film.