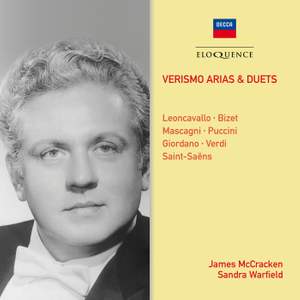 James McCracken (1926–1988) recorded the arias on the first half of this disc in 1969, four years after the duets with his wife, mezzo-soprano Sandra Warfield (1921-2009). Both singers were in their prime during those years and in the decade following. These performances of distinction offer some of the sappiest and most exciting operatic singing on record, taped in the full, glorious, 1960s Decca Sound, with McCracken singled out for the ‘forthright virility’ (Gramophone) of his singing. The seven tenor arias that open this recording were originally coupled with the complete Gardelli recording of Pagliacci, and praised for their ‘thrilling’ sound (Gramophone); some of them are issued on Decca CD for the first time.

The part of Amneris […] is exactly suited to Miss Warfield’s qualities, and there the result is extraordinarily convincing.