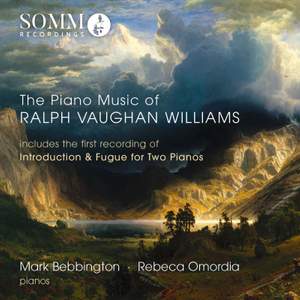 [the Introduction and Fugue] is given a fiery account by Mark Bebbington and Rebecca Omordia. Their thunderous triple forte chords strike with terrifying force in the close recording…an essential... — BBC Music Magazine, July 2017, 3 out of 5 stars More…

Vaughan Williams: The Lake in the Mountains

After his ‘hop across the Atlantic’ for his all-Gershwin disc (MusicWeb International “Recording of the Month”), Mark Bebbington returns to the English fare for which he is best-known, with the Complete Vaughan Williams Piano Music. This SOMM release contains world premiere recordings, notably the Introduction and Fugue. In this work, and in the Fantasia on a Theme of Thomas Tallis, both written for two-pianos, Bebbington is joined by the gifted young Romanian-Nigerian pianist Rebeca Omordia. The Tallis Fantasia in its original string version is an evergreen English work, repeatedly topping Classic FM’s listener surveys of favourite pieces. Of its two-piano version, Bebbington says: In transcribing the Fantasia for two pianos Vaughan Williams has created a work with leaner textures and clearer polyphony. The premiere recording on this disc is the Introduction and Fugue for two pianos written in 1947, which RVW dedicated to the famous two-piano team Phyllis Sellick and Cyril Smith. Bebbington says: “Vaughan Williams wrote the Introduction and Fugue concurrently with the Sixth Symphony – a work which shocked the musical world with its undisguised brutality and modernism, and this piano work belongs to the same musical aesthetic. The other solo works on the recording include The Suite of Six Short Pieces, better known in its later version for strings (Charterhouse Suite), The Six Little Teaching Pieces are a model of early-stage piano tuition raised to the highest artistic level. And the three miniatures - The Lake In The Mountains, Hymn Tune Prelude and Bach Chorale and Chorale Prelude transcription - inhabit a world of spiritual serenity that, says the pianist, “show how deeply Vaughan Williams had absorbed the counterpoint of JS Bach alongside the ‘new’ music of Ravel and Debussy.”

[the Introduction and Fugue] is given a fiery account by Mark Bebbington and Rebecca Omordia. Their thunderous triple forte chords strike with terrifying force in the close recording…an essential disc for Vaughan Williams fans and curio hunters

There’s a compelling understanding between the two pianists in their performances together. The opening of the Tallis Fantasia takes my breath away in its version for string orchestra, and does so too in this rapt, quite swift account for two pianos...Bebbington is wonderfully light-fingered [in The Lake in the Mountains], as he is in the two short suites.

An important addition to the Vaughan Williams discography.

It is honoured by a splendid performance, this is a remarkably successful arrangement. A fine recording quality ensures that all lovers of British music should have this.

In terms of rigour this is writing of absolute mastery; more than that the material is top-notch and full of deeply-felt passion; Bebbington and Omordia do it proud and the end result is enthralling, it is well-presented in terms of background and vividly recorded.