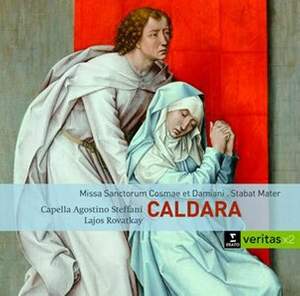 Pergolesi’s celebrated setting of the Stabat Mater is joined here by the Stabat Mater (and other choral works) composed by the Venetian Antonio Caldara (1670-1736). They are complemented by instrumental music by Vivaldi (Caldara’s contemporary in Venice) and František Tůma (1704-1774), Czech-born, but mainly active in Vienna.

The Westfälische Kantorei is a mixed choir from Herford in north-west Germany and is best known for its performances of a cappella sacred works. The choir was founded in 1948 and soon achieved an international reputation. Capella Agostino Steffani is a period-instrument ensemble founded in Hannover in 1981 by the Hungarian keyboard player Lajos Rovátkay. Since 1996 it has been known as the Hannoversche Hofkapelle.