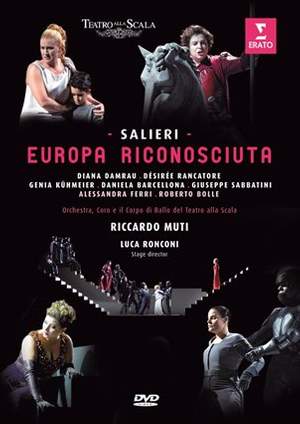 This performance is so striking that any serious opera-lover will want to add it to their collection — BBC Music Magazine, May 2017, 5 out of 5 stars More…

In 1778 Antonio Salieri’s Europa riconosciuta became the first work to be performed at the Milanese theatre later known as the Teatro alla Scala. Despite this honour, Europa riconosciuta (Europa recognised) remained unperformed for 226 years until 2004, when Riccardo Muti, then Music Director of La Scala, chose it to reopen the legendary theatre after three years of renovation work.

Sung in Italian, with subtitles in FR, GE, EN, IT

Diana Damrau and Désirée Rancatore both scintillate with vocal pyrotechnics in very high tessituras…Daniela Barcellona’s singing is firm, dynamically flexible and expressive as the noble hero Isséo…although a more idiomatic musical performance in a few respects can be imagined, this sleek production affirms Salieri’s credentials as a disciple of Gluck

Muti has the score sounding like Mozart…In sum, a splendid performance of an opera well worth exhuming, particularly under these conditions.