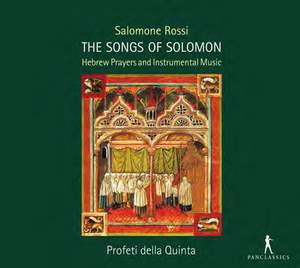 Rossi, S: The Songs of Solomon

Rossi, S: The Songs of Solomon

Salomone Rossi (c.1570-c.1630) was born in Mantua and lived there all his life. He was the first Jew to compose, perform and publish polyphonic settings of synagogue liturgy for mixed choir. He also made significant contributions to instrumental music; his four books of instrumental works include 116 pieces. In 1623, Rossi published his album of 33 songs titled “Hashirim Asher Lish’lomo” (The Song of Solomon) for various vocal ensembles ranging from 3 to 8 voices. The 'Songs of Solomon' focuses mainly on Jewish music of Mantua and Venice at the end of the Renaissance and early Baroque period. Flanked by excerpts from his instrumental music, the present programme provides a portrait in sound of this great, but little known, composer. Profeti della Quinta was founded in the Galilee region of Israel by singer and harpsichordist Elam Rotem. From its inception in 2003, it has focused on sacred and secular 16th-century acappella repertoire. Its members' background and training range from church-choral and Jewish-cantorial singing to opera and oratorio. For this project, the native Hebrew-speaking ensemble is unique in offering an unmediated grasp of both text and music in the historically individual style of Rossi's “Hashirim Asher Lish'lomo”.