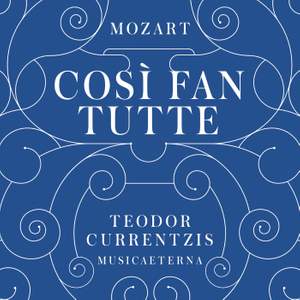 There's an undeniably a strong sense of personality to everything the conductor does...Most notable of all is the interventionist nature of the continuo, with the fortepiano, in particular, on... — BBC Music Magazine, February 2015, 4 out of 5 stars More…

Sony Classical continues its major Mozart opera project with conductor Teodor Currentzis and his orchestra & choir MusicAeterna. A ‘no-compromise’ studio recording cycle of Mozart’s three Da Ponte operas. Living in a unique artistic community established on the edge of Siberia, the musicians work and record under ideal conditions towards Currentzis’ stated goal “to show what can be achieved if you avoid the factory approach of the classical music mainstream”.

The recordings represent an unprecedented commitment by the artists in terms of preparation, session and post-production. They embody a radical new approach to orchestral virtuosity as well as to score fidelity, vocal style and performance practice. The second release in the series, Cosi fan tutte, will be released in November 2014.

In 2011, when invited to the post of Artistic Director at Perm’s opera house, Currentzis negotiated unheard-of conditions: unlimited rehearsal time; the freedom to schedule performances depending on the quality reached in rehearsals; the necessary resources to explore with his musicians anything deemed necessary for a fuller understanding of the repertoire, from Baroque dance steps to 20th century poetry and avant-garde cinema.

The orchestra and choir emphatically embrace a non-establishment attitude, constantly questioning themselves and striving for perfection. As important as their musical prowess (many members are laureates of international competitions) is their willingness to undergo exceptional rigours to reach the shared artistic goals. It is an accepted part of these musicians’ daily routine to spend a whole night of work and discussion about its progress at the opera house if necessary – or to devote a full rehearsal to shaping one single chord to perfection.

“The radicality of this recording is its precision. It is through strictest discipline that you unlock the perfume, bring the composer’s text into real life, create all these colours that are impossible on the stage. This is why we spent such a significant amount of time in the studio – because we were pushing to reach our limits, to jump above our limit and reach a new understanding of this music. That is the privilege of a ‘no-compromise’ studio recording. There are so many recordings which convey the general spirit of Mozart’s music. The only point in making a new one is to give the audience a chance to hear and learn about all the magic which this score holds. I made this recording because I wanted to show what can be achieved if you avoid the factory approach of the classical music mainstream. My credo is that every performance you give has to be like a pregnancy. You have to dream and you have to wait until the time comes when you see the miracle happening. If you’re not like that in music, you lose the central idea of music. Music is not a profession and it’s not about reproduction. It’s a mission”.

The soloists’ vocal technique is also markedly different to modern operatic interpretation, with a focus on intimacy and clarity, a use of vibrato remarkably restrictive even by today’s ‘period practice’ standards as well as an approach to melodic ornamentation derived from historic sources which cannot be heard in other performances of these works.

There's an undeniably a strong sense of personality to everything the conductor does...Most notable of all is the interventionist nature of the continuo, with the fortepiano, in particular, on the hyperactive side - though arguably always for genuinely expressive reasons. At its best the music simply pulses with life, without a hint of routine.

This second instalment of a new Da Ponte trilogy from Perm's opera house will infuriate as much it enthrals. Currentzis’s tempi are extremes of fast and slow — the Farewell Quintet and Trio sound languid, rather than balmy; allegro passages are frantic — but he is full of surprises.

the musical risks only seem occasionally wilful; the orchestral playing is wonderfully alive, and the sense of a score testing the conventions of 18th-century opera buffa (almost to destruction) is everywhere. Whatever one thinks of the individual performances too, there’s no doubt that the cast have all bought into Currentzis’s self-appointed mission.

wonders keep tumbling out as Lorenzo Da Ponte’s absurd libretto rolls on. The orchestra too keeps springing delights...the quirky sound mix certainly keeps you listening with ears cocked, eager to catch every nuance...Kinks and all, if you want a dynamic new Così, full of feeling humans rather than puppets, this is still the one to buy.

Currentzis seems intent on making waves rather than music, with often bizarre tempi and obscure point-making. Yet his cast is superb, especially the young men Kenneth Tarver and Christopher Maltman, with cracking playing from his Perm musicians.