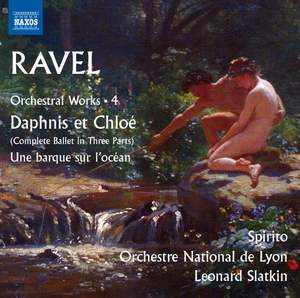 The sound is very good for CD…enabling the colours of Ravel's score to shine. — BBC Music Magazine, May 2017, 4 out of 5 stars More…

Composed for Sergey Diaghilev’s Ballets Russes, Ravel’s ‘symphonie chorégraphique’ Daphnis et Chloé is based on a classical Greco-Roman love story set on the island of Lesbos. He described the work as ‘a vast musical fresco’, and with its extraordinarily passionate music, lush harmonies and orchestration, is considered both his masterpiece and the epitome of Impressionism in music. Orchestrated from the third of his Miroirs for piano, Ravel’s Une barque sur l’océan is an evocative portrayal of the ever-changing moods of the sea.

The sound is very good for CD…enabling the colours of Ravel's score to shine.