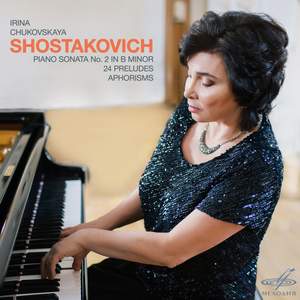 “Irina Chukovskaya is a pianist of a bright talent. Her performance is attractive because of its outstanding virtuosity, sonic culture and genuine artistry.

Different musical styles and directions are within her power,” Mstislav Rostropovich once described Chukovskaya’s art. An alumna of the central Music School and the Moscow Conservatory, a student of Vera Gornostayeva and Stanislav Neuhaus, and a winner of the 1980 International Chopin Competition in Warsaw, Irina Chukovskaya is now a professor of the Russian Gnessins Music Academy and one of the best representatives of the Neuhaus school in today’s musical and performing art and piano pedagogy.

The pianist has performed at the largest concert venues of Russia, Europe and Asia. She is particularly well-known in the United States where she has played over 500 recitals. Chukovskaya has been a long-time collaborator of the

conductor Maxim Shostakovich. “I have performed with Irina Chukovskaya on repeated occasions and witnessed her significant artistic achievements,” the musician tells. “This recording of my father’s works is among them. She renders the poignant tragicalness of the images of the sonata, flexible fickleness of the moods of the preludes and paradoxical eccentricity of the Aphorisms with conquering convincingness.”

The disc features Dmitri Shostakovich’s most significant works for solo piano – Aphorisms, and early experimental cycle written in 1927, the well-known 24 Preludes for piano (1932-1933) and Sonata No. 2 for piano (1943), one of the large-scale works of the war period dedicated to memory of Leonid Nikolayev, Shostakovich’s teacher and one of the founders of the Soviet piano school.