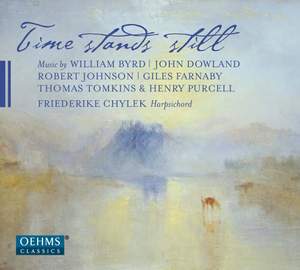 Alman (from The Fitzwilliam Virginal Book)

Friederike Chylek, born in Starnberg, began playing the piano and the recorder at age seven. Whilst still attending secondary school in Stockdorf and Gräfelfing, she began her artistic edu-cation in Munich with the harpsichordist Michael Eberth. Start-ing in the year 2000, she studied harpsichord and figured bass at the world renowned Schola Cantorum Basiliensis with pro-fessors including Jesper Christensen, with Rudolf Lutz (historical improvisation) and Edoardo Torbianelli (fortepiano).

She performs regularly in numerous concert halls in Germany and abroad and is a welcome guest at such select festivals as the Cadenza Baroque Days in Berlin, the Handel Festival in Göttingen and the Festiwal Maj z Muzyka Dawna, Wroclaw, amongst many others.

With the present CD, Friederike Chylek puts an end to preju-dices against English music - England was long denigrated as the “Land without Music” – bringing time to a standstill with works from the Golden Age of Virginal Music, numerous per-formance and compositional techniques of which provided decisive impulses for the development of European keyboard music.