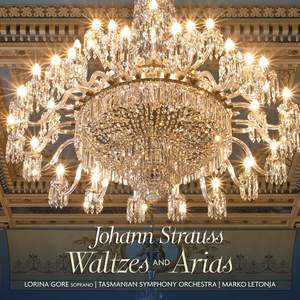 Magical melodies and swirling rhythms from the golden age of the Viennese waltz: the Tasmanian Symphony Orchestra present a new recording of the dazzling music of Johann Strauss, father and son.

Vienna in the 19th century was a city obsessed by music and dancing. By 1825, the adult population was about 200,000, and the capacity of the ballrooms about 50,000. Both Johann Strauss and his son Johann Strauss II were, in turn, known as ‘the waltz king’, and their music turned them into household names across Europe. On this album, the older Strauss is represented by his ‘Music of the Spheres’, while the attention turns firmly to the output to his son, including his infamous waltz ‘On the Beautiful Blue Danube’ and the ‘Thunder and Lightning Polka’.

Strauss II also took inspiration from Vienna’s obsession with foreign musical influences, and we hear strains of Turkey in the ‘Persian March’, and of gypsy music in ‘The Gypsy Baron Overture’ and the Czárdás – a kind of folk dance – from the opera Ritter Pásmán. Soprano Lorina Gore joins the orchestra for the vocal waltz ‘Frühlingsstimmen’ (‘Voices of Spring’), as well as arias by Strauss II (‘Adele’s Laughing Song’ from Die Fledermaus) and Lehár (‘Meine Lippen, sie küssen so heiß’ (‘My Lips Kiss So Hotly’) from Giuditta).

The album is conducted by the TSO’s Chief Conductor and Artistic Director Marko Letonja, whose experience with the Vienna Symphony, Vienna State Opera and a host of other European and international orchestras brings new depth to this much-loved music.